It's World Lion Day again and I immediately think of George Adamson and my old friend Gareth Patterson. I met Gareth many years ago at the first open meeting in South Africa concerning the culling of Elephants in the Kruger National Park. I had read his amazing books about his experiences reintroducing back to the wild the three wild Lion cubs which he brought from George Adamson in Kenya. I sent him a "thanks" note which he kindly replied including a picture of him with his beloved male young Lion "Batian", just before he was murdered by a white farmer. At that time all of my children were deeply turned on to Gareth's and other brave defenders of wildlife about their meaningful living on our Planet and courageous efforts to save the remaining wilderness of our Planet.

Gareth's extraordinary work through his books and his organization has changed many of us wildlife lovers to become somehow more involved and definitely more aware of the survival battle of the remaining wild beings of our beloved Mother Earth.

Therefore today we pay special respects to Gareth Patterson www.sekaiafrica.com and other true environmentalists like Chris Mercer & Berveley Pervan of CACH www.cannedlion.org,Dereck&BeverlyJoubert www.nationalgeographic.com/explorers/bios/jouberts/ and of course both George and Joy Adamson for their extraordinary work on behalf of our remaining wild African Lions. May the African Lion live free forever! 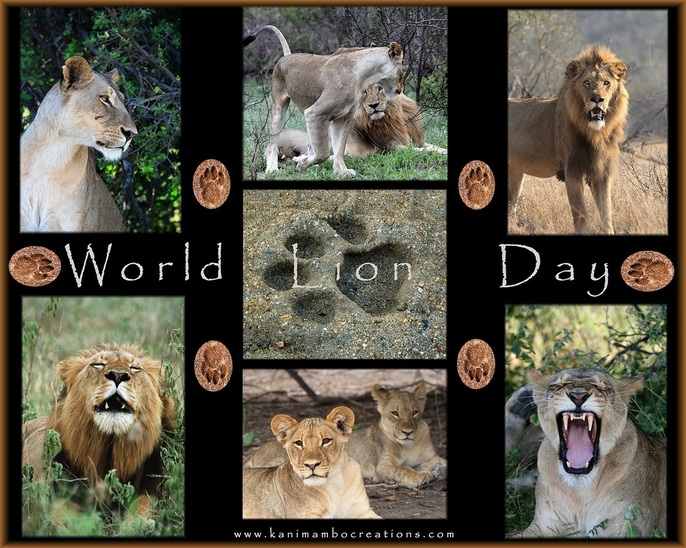 A message from Chris Mercer  of www.cannedlion.org

We hope that once you have read our message, you will be motivated to do what you can to bring the canned hunting of lions and other captive-bred predators in SA to an end.

WHAT IS CANNED HUNTING?

Canned hunting is the lion farmer and trophy collector’s substitute for real hunting. We define it as:
Any hunt where the target animal is unfairly prevented from escaping the hunter, either by physical constraints (fencing ) or by mental constraints (hand reared, habituated to humans).

On this definition, all hunts of captive – bred lions are canned hunts.

1. Numbers of lions being captive-bred in S.A. are growing by the day. Latest estimate; 8000 – nearly three times more than the number of wild lions in S.A. Reserves, that number less than 3000.

3. Lion farming does not fall under the Department of Agriculture but the Supreme Court has ruled that it has nothing to do with conservation, so it cannot be regulated by conservation officials either. Lion farming thus falls between two government departments. In consequence, captive predators bred for hunting purposes have no regulatory protection.

4. Lion Bones are sold to known Asian crime syndicates who pay lion farmers US$1,000 for a lion carcass, which is processed in Asia and then fraudulently sold as tiger bone cake for US$70,000 per carcase (US$1000 per 100 grams).


WHY SHOULD THIS INDUSTRY BE BANNED?

1. It is cruel. The whole business model is based on cruelty to helpless animals from birth until death. Bow hunting of tame lions is permitted in some provinces. Imagine the public outcry if farmers allowed hunters to come on to livestock farms and shoot sheep and cattle for sport?

2. It is causing a backlash against tourism to South Africa. Ethical tourists are already boycotting SA, causing losses to the legitimate tourism industry. These boycotts will surely increase over time.

3. It is illegal, but no one enforces the laws against such cruelty. The Animals Protection Act of 1962 covers cruelty to captive wild animals; not only cruelty to livestock and domestic animals.

4. It is a wasteful use of land and resources for no public benefit outside the narrow commercial interests of the hunting industry.

5. Private deals with rich foreigners give plenty of opportunities to unscrupulous soldiers of fortune for fraud and foreign currency swindles. Forensic audits need to be conducted across the industry, to protect the fiscus.

6. It is fraudulent at so many levels, right down to the sale of lion bones as tiger bone wine or cake, that have no proven medicinal value.

8. Already there are reports in the media about wild lions being killed in Boswana to obtain cubs which are then smuggled across the border in to S.A. Unscrupulous S.A. lion breeders will buy them to bring fresh blood in to their lion stock for genetic reasons, and to ward off captivity depression. This wholesale and unscientific killing of lions has long term effects on wild prides, destroying the core pride function. Research shows that it can take as long as seven years for a lion pride to re-establish itself after the death of the trophy male.

On   www.cannedlion.org you’ll find all you need to know about canned hunting, with a selection of relevant TV videos._